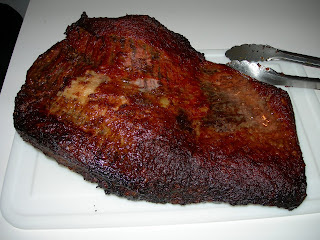 Each year I do a brisket for the 4th of July and Memorial Day. I love doing brisket. Briskets aren't hard to do as long as you know how to handle them. The first thing is that you don't buy a trimmed brisket. If you want a dry brisket, buy a trimmed brisket. If you want an extra moist brisket, buy an untrimmed brisket. You may need to trim some of the fat, but most of it will remain. The reason is very simple. The fat will keep the meat moist. The goal is to cook this piece of meat low and slow. There is no such thing as high and fast when it comes to brisket. You can buy one of those pre-cooked briskets and serve them in a couple of hours, but I don't believe they have quite the taste as a beautifully done brisket. It takes me, on average depending on size, about 12 hours to do a brisket from start to finish. So, don't think you are going to just throw it on the fire and walk away. No, sir. You will need to stay on this one for a while, cowboy.
The other secret is giving your brisket a dry rub. A dry rub is a seasoned mixture of salt, brown sugar, chili powder, etc. that will add favor to the meat as it cooks. The other little secret is mopping your meat during the cooking process. A mop is a liquid mixture of spices that is used to keep the meat moist on the outside while the fat does the work on the inside. I will mop my meat on a regular basis and rotate it so that it does cook too fast on one side. That's why I say this isn't a missile. There is no "fire and forget" on a brisket. You are going to be with this meat for a while.
Now, there are those that say that you can't do a brisket on a gas grill. It just ain't right. But, I'm here to tell you that you can if you know what you are doing. First, thing I do is prepare a smoke pouch. What in the world is a "smoke pouch"? It is a pouch made of heavy duty aluminum foil. Inside of it, you place your soaked wood chips. I use hickory or mesquite wood chips and soak them in water for about 30 minutes. After 30 minutes, I drain the water and put them inside the foil and roll it up. I make a couple of those pouches and using them on the grill. They heat up and start smoldering and then they start smoking. YUMMY! You get the picture. The smoke gets into the meat and you have that wonderful smoke ring in your meat. The smoke ring is that 1/16 to 1/8 of an inch near the surface of the meat that receives the smoke. It looks like a dark pink ring in the meat. If you have that, then the smoke pouch did its job.
Posted by Jesse Johns at 8:34 PM