Here's a great recipe from my friends at Green Gate Farms.

Directions
Chop all ingredients and place in a saucepan. Bring to a boil, reduce heat and simmer for 10 minutes. Pour salsa in hot jars (pints). Seal and water bath for 30 minutes. This is for canning.

If you prefer, reduce the amounts by half and store the salsa in the refigerator for 4 hours minimum to allow the flavors to blend together. You can store this wonderful salsa up to a couple of days.
Posted by Jesse Johns at 6:58 AM No comments: 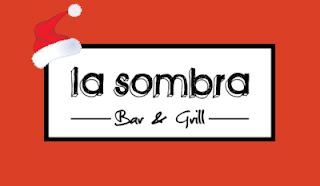 Austin’s sizzling South American restaurant, La Sombra Bar & Grill, is spicing things up this holiday season, adding a little heat and a whole lot of flavor to traditional yuletide fare. From December 14 through December 23, La Sombra will be serving up two scrumptious styles of Peruvian tamale, perfect for livening up any holiday meal.
Available warm or frozen and by the dozen ($16) or half-dozen ($9), these comforting South American tamales are made in-house using the finest yellow corn masa seasoned with Peruvian yellow peppers called aji amarillo, and wrapped in banana leaves. Flavors include the Chicken and Green Chile Tamale, cooked with poblano peppers and served with tangy tomatillo salsa; and the traditional Pibil Pork Tamale, featuring pork that has been braised in chicken stock with oranges, cloves, achiote and banana leaves, and served with a guajillo salsa made from toasted guajillo peppers and charred tomatoes. For customers’ convenience, tamale orders will be taken by phone before 3 p.m. each day, with orders available for pick up the following day after 3 p.m. A credit card number is required when ordering.

With the holidays fast approaching, your home will be filled with guests. I highly recommend this recipe when you want to impress them with a simple yet tasty appetizer.

2.Cover apricot sauce and heat in a microwave oven at full power until sauce begins to bubble, about 1 to 1½ minutes.

3.Set Brie in apricot sauce. Return to microwave oven and cook, uncovered, until the cheese is hot and slightly melted, about 1 minute; check at 20-second intervals. Be sure to watch and not overcook the Brie.

4.Place baguette slices on a platter and serve.
Posted by Jesse Johns at 7:44 AM No comments: 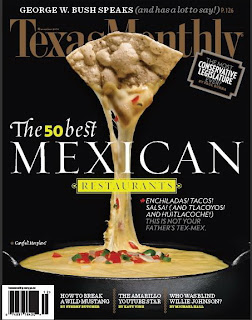 In its December issue, available on newsstands next week, TEXAS MONTHLY will publish a definitive list of the 50 best Mexican restaurants in Texas, compiled by food editor Patricia Sharpe and her team of eaters. Today, to whet your appetite, editor Jake Silverstein released the names of the top 5 restaurants on his blog.


They are (in alphabetical order by city):

Fonda San Miguel, Austin
“The brilliant chile relleno San Miguel substitutes a dried ancho for the usual poblano and stuffs it with shredded chicken, green olives, capers, and almonds, a combination that is classic and avant-garde all at once.”

Cuquita’s, Dallas
“This unpretentious neighborhood joint may be a hub for political organizers, but when you’re here, it’s all about the food...The pozole sends us into a swoon, its lusty rust-hued broth filled with hominy and big chunks of pork, some still clinging to bone.”

Salsa Fuego, Fort Worth
“Salsa Fuego certainly looks like a dive, but when it comes to Mexican food, this piñata-hued hole-in-the-wall may just be Fort Worth’s crown jewel.”

Hugo’s, Houston
"Houston’s temple of interior Mexican cuisine boasts a menu not only mind-bogglingly vast but also based on authentic recipes from chef and co-owner Hugo Ortega’s homeland of Puebla...immersion in the menu’s breezy seafood selection turns up ultra-fresh huachinango a la veracruzana, a traditional dish from coastal Veracruz. Here it’s a whole snapper roasted to a perfect turn and surrounded by a chunky tomato sauce jazzed with olives, capers, and onions.”

SoLuna, San Antonio
“Chef-manager Gerardo Calvillo is in love with recipes from Mexico’s heartland. Thus you will also find specialties like chile en nogada, a poblano lusciously stuffed with cooked fruits and ground beef and pork.”

To read more about the story, check out this post on editor Jake Silverstein’s blog: http://www.texasmonthly.com/blogs/pagebreak/?p=620
Posted by Jesse Johns at 9:43 PM No comments:

Chef Weaver is spending 16-days trailing the chefs at famed restaurants Diner, Marlow & Sons, Marlow & Daughters, and Gramercy Tavern. Known for their casually sophisticated menus changed and prepared daily by highly regarded Executive Chef Sean Rembold, Diner and Marlow & Sons will afford Chef Weaver the opportunity to learn every aspect involved with serving their finest modern-American cuisine. From learning how to operate as part of a kitchen team, how recipes are created and plated, and how prep work is completed, to understanding the process of costing food, Chef Weaver will receive complete kitchen training from Chef Rembold and his team. Chef Weaver will also spend a day at the Marlow & Daughters renowned traditional butcher shop, where he’ll learn the culinary art of curing fine meats. He’ll then trail the chefs at the acclaimed Danny Meyer-owned Gramercy Tavern, named by the Zagat Survey as New York City’s most popular restaurant.

“This trip is designed to help enrich Chef Weaver’s culinary expertise while giving him new inspiration and techniques for Mulberry menu items,” says Mulberry owner Polombo, who also operates several New York City eateries and annually sends at least one of his chefs for in-house kitchen training in a revered restaurant. Though Polombo is currently working to open Haddingtons in downtown Austin, he is determined to continue elevating the dining experience at Mulberry. “As a restaurant group, we’re focused on enriching our people, and we’re putting a strong emphasis on bettering Mulberry, even as we launch another restaurant concept.”

Mulberry is located at 360 Nueces St. on the street level of the 360 Condominium Tower in downtown Austin. For more information about Mulberry or Chef Jacob Weaver, call (512) 320-0297, or visit http://www.mulberryaustin.com/.
Posted by Jesse Johns at 5:25 PM No comments: