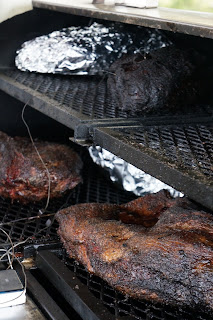 Foodways Texas and the Meat Science Section at Texas A&M University will hold our second Camp Brisket on January 10-11, 2014.

While our popular Barbecue Summer Camp takes a broad approach to barbecue cookery and culture in Texas and beyond, Camp Brisket focuses on that quintessential Texas smoked meat, the humble brisket, covering topics such as grades/types of beef, types of smokers, wrapping or not wrapping the brisket, and much more.

Attendees will receive direction from professors in the Meat Science Section at Texas A&M, as well as hear from pitmasters from around the state regarding some of their basic techniques. Programming schedule coming soon. Read about last year's camp here, here, and here.

*Cost of ticket includes all sessions, talks, and activities as well as lunch and dinner during the event.


Here here for more information including ticket prices.
Posted by Brother Jesse at 1:12 PM No comments:

Whether it's for drinks after work, hosting a client, or a night on the town, the ambiance and great music makes J. BLACK'S Feel Good Lounge the place to be for all occasions.

Posted by Brother Jesse at 6:57 AM No comments:

Opening this winter, Olamaie will bring the taste of the South with a new modern spin, to downtown Austin. Unique to the city’s culinary scene, the restaurant will quickly become one of Austin’s newest dining hot spots. Prior to the opening, Olamaie will host exclusive pop-up dinners beginning at Lenoir on August 6.

"When I moved out of Austin to continue my training, my heart stayed here,” said Co-Executive Chef Fojtasek. “Now I'm back with a team of unbelievably thoughtful and talented folks doing food that has been a lifelong passion.”

Olamaie will fill the Southern cuisine void with a menu that focuses on farm-to-table freshness and a dining experience that combines classic southern hospitality with modern restaurant craftsmanship. Until the opening this winter, Olamaie will host multiple pop-up dinners across Texas, beginning at Lenoir on August 6-10, to represent what they endeavor to do.

Each pop-up dinner will have a limited amount of seating. Reservations for the pop-up dinners at Lenoir will begin on Monday, July 15 at www.olamaieaustin.com/pop-ups.

Pop-up dinners hosted by Olamaie will also include the following:


Olamaie will be located at 1610 San Antonio Street, Austin, TX 78701. For updates, go to www.OlamaieAustin.com and follow on Facebook @OlamaieAustin and on Twitter @OlamaieAustin.
Posted by Brother Jesse at 6:45 AM No comments:

Pelóns Tex Mex is excited to announce that it will now be serving Sunday brunch every week starting this Sunday, July 14. Keep the weekend going and start your Sunday Funday with Tex-Mex breakfast specials and a Bloody Mary/Maria Bar.

“Brunch is an Austin staple and we’re glad that we can finally join in the tradition,” said Doug Guller, CEO of ATX Brands. “Pelóns has become a Tex-Mex hot spot for lunch and dinner, and we wanted to expand our menu to allow our guests the perfect start to their Sundays.”

Delicious brunch menu items include Huevos Rancheros, Migas, Breakfast Burritos and Breakfast Tacos all served with crispy potatoes and refried beans paired with hard-to-beat drink specials. Guests can enjoy the Bloody Mary/Maria Bar for $6, beer including Lone Star, Tecate and Pabst Blue Ribbon all for $3, Mimosas for $3 and Pelóns Signature Margarita for only $4.

Guests will be able to spend the afternoon lounging in Pelóns’ expansive patio, complete with water misters that are perfect to beat the summer heat, every Sunday from 11:00am to 3:00pm.

AT&T Executive Education and Conference Center, along with Lone Star Paralysis Foundation, will host Pay It Forward with Daniel Curtis on Thursday, August 8 from 6:00 to 10:00pm at the AT&T Conference Center.  In its third year, the benefit’s goal is to raise money for those with spinal cord injuries. Rotel and The Hot Tomatoes, a popular cover band named one of the top ten party bands in the United States by Harper’s Bazaar magazine, will perform your favorite songs from the 50s, 60s, 70s and 80s. In addition, the evening will feature a dynamic lineup of Austin’s top culinary talent guaranteeing a memorable night.

In May 2011, Daniel Curtis was injured in a diving accident, which resulted in a severe spinal cord injury. His family, friends and co-workers teamed up with Lone Star Paralysis Foundation to stage a fundraiser in July 2011, raising over $65,000 to help with his medical expenses not covered by insurance. Now following two successful years, Daniel, in partnership with Lone Star Paralysis Foundation, will pay it forward once again to raise awareness about the spinal cord injury community and help those in need of medical assistance.

“I’ve now spent a little over two years of my life in a wheelchair and have gone from being the newbie to playing more of a mentor role,” Daniel said. “Because of the Lone Star Paralysis Foundation, Austinites with spinal cord injuries have a recovery center they can go to five days a week for free. It’s not just a gym and it’s not just for physical recovery; it’s a family, a support group and therapy for the body and the mind. Pay it Forward is about making the necessary resources available so that people can face their life’s greatest challenge with not only a sense of hope and purpose, but knowing the chair is just a temporary solution.”

Tickets begin at a suggested donation of $75 and VIP tickets for $125. VIP tickets grant early entry into the benefit at 6:00 pm, which includes a happy hour, an early opportunity to bid on silent auction items, as well as a chance to mingle with the award-winning chefs.  To make reservations or donate to this cause, please visit www.payitforwardwithdaniel.org.
Posted by Brother Jesse at 11:51 AM No comments:

Recently-opened East Austin hotspot Mettle—the first restaurant venture by über nightclub developer Bridget Dunlap—is offering a new lunch menu just in time for the lazy days of summer. Executive Chef Andrew Francisco has created offerings that infuse traditional bistro with eclectic international influences. The ingenious fare (innovative pairings and modern updos on classics) fits a remarkable re-imagined space that was once home to a tortilla factory. Dunlap, who transformed the downtown nightlife scene by refurbishing dilapidated properties on Rainey Street and turning them into the city’s hippest clubs and pubs, has once again shown her visionary prowess.

Francisco, who interned at the French Laundry and worked at Austin’s Olivia as the chef de cuisine, uses locally-sourced products and ingredients from his on-site garden for a menu that boasts simple starters—watermelon, kaya, and mint ($5); pickled anchovy, black olive, and pepper ($5); and vegan chicharron and salsa ($5)—and smart flavor and texture pairings, such as Beet with white chocolate, jalapeño, and chevre ($10) and Beef Tongue Tacos with escabeche, crème fraîche, and salsa verde ($11). Salads include the Walnut Caesar—crispy parsley and pecorino Romano dressed in balsamic ($7)—and the Grain (kale, almond, and pickled tomato; $7).

Larger bites range from a Grilled Cheese (this revamped version features a crispy green tomato, spicy mustard, and caramel; $10) and Fried Chicken with buttermilk-mustard ($13) to Fish and Chips (red fish, pickled chili, and aioli; $11) and Pork Belly Quesadilla with cilantro and chipotle crème fraîche ($9). Even Chinese Broccoli is elevated with white soy and foie gras butter ($7).

Like Dunlap’s Lustre Pearl, Clive Bar, and Bar 96 concepts, Mettle pours freshly squeezed juices and seasonal cocktails such as the Siamese Caipirinha with Thai chili and basil-infused Cachaca and lime or the Wimbledon Cooler with Pimm’s No. 1, cucumber, lemon, and ginger ale (all cocktails are $10). And Mettle offers an extensive wine list—probably the most selective on the east side—with about eighty labels and by-the-glass options.

The modern L-shaped venue seats nearly 200 guests in the 4,000-square-foot space that houses a variety of dining areas and a bar that features a floor-to-ceiling sculpture by lon Art. The modern architecture mixed with decorative European wall coverings elicits a relaxed vibe that encourages socializing indoors as well as out on the plant-lined patio.


"Celebrate the Fourth of July"!

The Vineyard at Florence "Aurelia" and "Aura"-  Blanc d'Bois from Williamson County
Inwood Estates Tempranillo-Cabernet and "Cornelious"- Tempranillo from the High Plains
And, the Unique Sounds of Tim Scott!
Thursday, 7/4
4 - 7 p.m.

Tim takes his place among those who have come before him—the ones who supported and guided him on his journey. As the music unfolds, you can tell who they are—Dan Fogelberg, John Lennon, George Harrison and Warren Zevon. The lyrics say it all, “So I spin another story like those before I still raise my pen…There’s a common thread between us though we often stumble, we rarely fall.” That common thread is the ability to take a handful of words, a few chords and a shitload of honesty to grab people right where they live. Tim’s got it down good.

Malverde, the private event space at La Condesa, announced today that its current bar and lounge program will end on Saturday, July 6 in order to expand the private events program. After a successful run as one of the top lounges in Austin, Malverde’s expansion is intended to accommodate increased demand for private events by offering a more convenient and expanded weekend availability, as well as easier access to the La Condesa kitchen.

“We have enjoyed a successful four and a half years as a lounge,” said Alexis Lanman, director of marketing and events for Violet Crown Management. “However, Malverde has primarily evolved into a private event space for La Condesa and extension of our dining room. We look forward to the transition as well as the opportunities it will provide us to welcome a larger scope of private and special events.”

Wired for presentations, DJs and live performances, Malverde is designed with a flexible room configuration to accommodate rehearsal dinners, cocktail receptions, corporate parties, happy hours and other breakaway functions. Malverde will also continue to be catered exclusively by La Condesa.

Perched above 2nd Street directly over La Condesa, Malverdeoffers skyline views of downtown Austin and looks directly into Austin City Limits Live at the Moody Theatre and City Hall.Malverde is located at 400 W. 2nd Street. For updates and more information about Malverde, please visit www.lacondesa.com/malverde. Follow Malverde on Facebook @Malverde.Austin and on Twitter @MalverdeAustin.   To book your next private event please contact Jessica Tate at Jessica.Tate@lacondesa.com.

Malverde will be throwing a party to celebrate four great years as a lounge on Saturday, July 6th.  The party will begin at 5pm with DJ Michael Crockett and happy hour pricing until 9pm.  Drink specials will continue throughout the night with Deejay Honeycomb, DJ F’in A and DJ Starsign spinning until 2am.
Posted by Brother Jesse at 9:55 PM No comments: