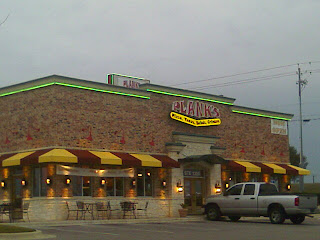 The place is called Plank's and it is known for its grinders (hot sandwiches), pizzas, tacos and salads. We decided to try different sandwiches. Robert had the sirloin steak sandwich with macaroni salad. Ken had the stromboli and I had the Italian grinder. We both had the pasta salad. Robert really loved the macaroni salad and the sandwich was delicious, hot and hearty. The bread made the sandwich for Robert. It was a ciabatta bread which is one of my favorite crusty breads.

Ken and I enjoyed the pasta salad. It was very tasty and had the right about of oil and vinegar. I have had some pasta salads that have been swimming in too much oil or vinegar. The spices were well-balanced and the salad had variety.

My sandwich, the Italian Grinder, was absolutely delicious. I had it loaded with lettuce and tomatoes. The tomatoes were chopped and so it was easy to handle. The other thing I noticed was that the meat was chopped up and spread out throughout the sandwich. It is was different from what I'm used to, but not bad at. Just a little mess, but grinders often are.

Ken enjoyed his stromboli sandwich and he enjoyed it as well. He fought hard to stay away from the Austin Chili Dog. I may try that one next time or a pizza.

I talked with Luke, the owner and operator of Plank's. He used to work for McAlister's for 4 years, 1 year for Papa John's and 1 year with McDonald's. So, Luke has a good solid background in food service. He noticed that people love great, hot sandwiches. Needless to say, Luke learned his lesson well and is giving people what they want. Additionally, the soda fountains are in the dining area so that people can serve themselves and get refills on their own. You order your food at the front counter and they give you a number and your cup. The wait staff bring out your sandwich and they are very friendly. Luke made it a point to pick people who were customer-oriented. He did a great job in that area.

In the future, he will be offering beer and wine to go along with the sandwiches. I think that is a great idea. Luke is also planning on setting up a movie night for children as well as old movies for adults. If that is the case, I might be dropping by for a movie night or two. I will be looking for appetizers and beers for movie night.

I have asked Luke for an interview regarding his restaurant and his business ethic. Yes, readers, I will be posting the video interview on my food blog.

Isn't it called Plank's? Not Plank.

Yes, it is. I was using the name from the receipt for the meal. My mistake. Thanks for the catch.