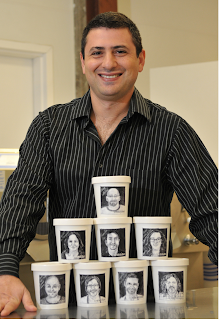 Kreindel originally made waves among Houstonʼs chef community after launching Trentino Gelato six years ago with artisan-style gelato reminiscent of his native Argentina. After relocating to Houston in 2001 as a software information systems manager, he longed for the gelato of his hometown Buenos Aires so much that he decided to go into the business. He launched Trentino Gelato in 2006 exploring different combinations of flavor – from strawberry lavender to olive oil with black pepper – and used premium local and organic ingredients, including all natural milk from Way Back When Dairy. It wasnʼt long before Kreindel earned the respect of Houston-area chefs – not to mention the moniker “Houstonʼs Gelato Maestro” by Houston Chronicle food critic Alison Cook.

After several years of making some of the freshest and most sublime frozen concoctions in Houston and selling primarily as a wholesaler to local restaurants, last year Kreindel launched the Chef Series collaborating with some of the Bayou Cityʼs biggest culinary figures – including RDG + Bar Annieʼs Robert Del Grande, tʼafiaʼs Monica Pope, and DʼAmicoʼs Nash DʼAmico, among others – offering pints of chef-inspired flavors bearing the likenesses of the chefs along with the inspirations for their flavors.

The Chef Series in Houston proved such a hit – theyʼre among the fastest selling items in the frozen food sections of specialty food stores throughout the city – that now he is partnering with eight of Austinʼs best and brightest culinary talents to launch Austinʼs very own Trentino Chef Series Gelato, with decidedly inspired results.
Though Kreindel has spent five years thinking of a way to produce local chef-inspired creations, he says “We werenʼt ready. Now we think itʼs the time to make it happen.” And not a moment too soon.

ABOUT TRENTINO CHEF SERIES GELATO
Trentino Gelato has worked with many passionate Houston and Austin chefs by creating gelato and sorbet to their specifications for their restaurants. Marcelo Kreindelʼs six year-old business – known for making the richest, silkiest, freshest frozen treats – is a favorite among local chefs looking for gelato made with top-notch ingredients and is now available to the public in upscale, specialty grocery stores. For more information please visit www.trentinogelato.com or call 713-444-1439.
Posted by Brother Jesse at 9:16 PM

Good news that Chef Series is launching in Austin. Hope it will gain lots of popularity.