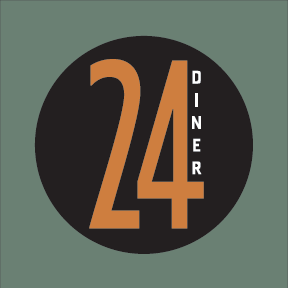 24/7/365: The Year In Review
Mayoral Proclamation Closes Out A Momentous 2011
On December 1, 24 Diner will celebrate its second birthday. It will probably be a relatively quiet affair, celebrated by the restaurant’s five local partners over pints and shared plates of corn fritters and chicken & waffles. But on the eve of our anniversary, November 30, Mayor Lee Leffingwell is inviting the whole city to celebrate Chef Drew Day and recognizing 24 Diner as “Small Business of the Month!” There will be a ceremony on site around noon, and we will be offering $3 Brooklyn Lagers (Drew’s favorite beer) throughout the day for anyone who would like to raise a glass in honor of these accolades!

Perhaps our most satisfying accomplishment to date is the fact that (under Chef Drew’s leadership) we have spent more than $100,000 in purchases from 73 farms since January 2010. Incorporating local and organic fare whenever possible and supporting other small businesses in the community is central to our philosophy.

Here’s to Chef Drew and 2012 – and the tremendous support of our customers and the local food community! We look forward to the year ahead.